The myth of cheap Bulgarian roads 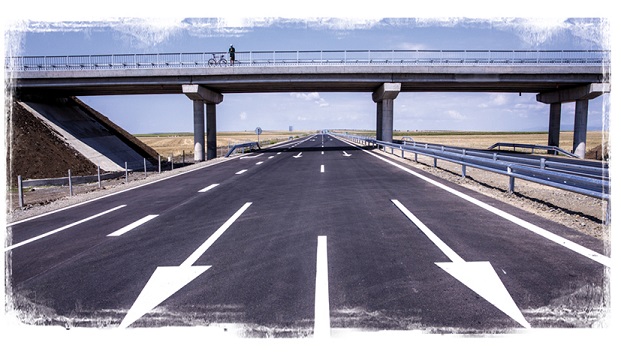 Motorway building is the GERB governments’ achievement most frequently bandied about. Indeed, recent years saw the completion of the Trakia and Maritsa motorways, the Struma is well underway, and residents of North Bulgaria are hoping to see the Hemus begin sooner rather than later. But there has been something else for us to get used to: repairs coming right on the heels of a road opening. Bottomed-out road sections, cracked asphalt, and one roadwork after another. The explanation we get is that new road building in Bulgaria is cheaper compared to that in other European countries; therefore, lower quality is fair enough to expect. The following is a debunking of this claim.

An inter-village road costing over EUR 0.5 million/km. The Belokopitovo junction, exorbitantly expensive and greatly delayed. The Kresna Gorge Tunnel, nearly 14 times as expensive as the Norwegian Laerdal, currently the longest tunnel in the world. The “golden” 19-kilometre-long Lyulin highway, with a price tag of EUR 9.6 million per kilometer. These are just a few examples showing how European and national infrastructure funds are spent in Bulgaria.

Infrastructure projects in this country have been plagued by “systemic problems.” Systemic they are since they are fairly common. They emerge at the very beginning of the public procurement process and run all the way to warranted maintenance of finished roads. Suspicions that projects are being won by selected companies are compounded by public data on the concentration of commissions in the hands of just a few contractors. If any of these preferred companies suffers from a short supply of equipment or staff to do the work on specific projects, it typically resorts to subcontractors. This is not allowed for projects supported by European funds, but it is also a constraint circumvented through contracting rented people and equipment, which for all intents and purposes amounts to outsourcing.

Road building problems are the most visible ones because they are subject to day-to-day monitoring by virtually every citizen. The instances of shutting down roads for repair a mere year or two after their official opening are not infrequent. Each successive government blames the foregoing one for having carried out substandard works. And while until recently we had accepted that our roads were cheaper and therefore inferior in quality, in recent years the price per kilometer of new motorway has risen many times.

In 2010, prices ranged between EUR 2 and 3 million per kilometer. Today, one kilometer of motorway in Bulgaria has already reached EUR 4.2 to 6.7 million. In neighboring Romania, the price of 1 km of new motorway is EUR 5 million on average, while Via Egnatia cost Greece EUR 6.8 million per kilometer. In Croatia, prices are within the EUR 6 to 8 million range, in Poland the A2 hit 4.7 million at completion, while German prices hover at 9-10 million.

The explanation of low prices that drag along inferior quality should be relegated to history. Prices here are simply no longer sub-European although we still enjoy the cheapest labor in the EU.

Here are some facts and figures:

The mountain road between Sapareva Banya and Panichishte enjoyed a motorway level of funding. This 5 km stretch received EUR 2,759,750 of which EUR 2,643,840 came through the Rural Development Program overseen by the State Fund Agriculture (SFA). Although the average price is around EUR 350,000 per km for this category of road, this one costs more than a half million. The SFA argued that the payment had been made by due process. The road was built by the Panichishte DZZD–2104 consortium (1).

Photos in the Bivol investigative journalism website show that some of the invoiced activities were never actually carried out, e.g., the laying of bituminized gravel. Soil from nearby slopes has been used in many places along the track. Most of the drainage system malfunctions since the specified concrete pipes were replaced with PVC ones.

Suspicions of rigged public procurement were raised during the allocation of the Hemus Motorway lots in 2015 (2).

Back in 2015, contractors set prices almost 100% above the ones projected by government experts to build the motorway’s two new legs between Yablanitsa and the fork to Pleven and Lovech. By these prices, 60 km of Hemus Motorway would have cost taxpayers a record EUR 400 million without VAT, versus the projected price of EUR 222 million.

Hemus has so far emerged as the most expensive highway. Lot 1, the 23 km stretch from Yablanitsa to Hemus Motorway’s III-307, had been estimated to cost EUR 85.8 million. Six bidders applied for it in 2015. The lowest bid was EUR 129,867,889 without VAT, i.e. 85% above projections. So, the lowest bidder would charge us roughly EUR 5.6 million per kilometer of Hemus motorway. Still, this leg of the road has 2 interchanges, 6 viaducts and 1 tunnel. However, the highest score was given to the AM Hemus Lot 1 consortium, which offered a higher price of EUR 142 million without VAT.

Lot 2 is 35 km long. It was contested by five candidates. The government experts’ projected cost was EUR 136 million. The lowest bidder, Taşyapı Inşaat Taahhüt Sanayi Ve Ticaret AD, Turkey, demanded nearly EUR 230 million, exclusive of VAT, while the highest one, Astaldi SPA AD from Italy wanted EUR 361 million. Therefore, the cheapest kilometer of Hemus Motorway’s lot 2 could add up to EUR 6.7 million). The highest score for Lot 2 was given to the technical bid of PST HEMUS 2 consortium.

In February 2016, Prime Minister Boyko Borissov suspended the bidding for Hemus Motorway’s lots due to suspicions that the companies enjoyed the wrong kind of connections.

“If public space is haunted by misgivings over a deal worth about EUR 400 million of state money, I am ill-advised to leave any kind of conjecture in society to have done something wrong. Therefore, I shut it down,” Borissov told the media.

A new tender for the 9.3 km extension of the Hemus Motorway (from Yablanitsa to Boaza) was announced in late July (3). It is projected at EUR 40 million without VAT, i.e. about 4.4 million euro/km. Small amendments about road size have been adopted since: the road width remains the same, 29 m, but the median strip will be a meter narrower than initially planned. Also, maximum speed was reduced from 140 to 120 km/h.

The 5-kilometre stretch from Belokopitovo towards Kaspichan, including a sizeable interchange, built under the Road Infrastructure Agency’s New Road Building program, snatched nearly EUR 33 million from the central budget. AM Cherno More AD was the contractor.

Belokopitovo became the material of folklore even before its launch because its left turn is invisible from the air. The real problem, however, is that the road junction was exorbitantly overpriced and hugely delayed. The average motorway price in 2015, when Belokopitovo saw completion, was EUR 3.3 million/km. But the five kilometer between Panayot Volovo and Belokopitovo, along with the road junction, had an average price of EUR 6.7 million /km.

With all its facilities, tunnels, bridges, and retaining structures, this 19-kilometre road had an average cost of EUR 9.6 million/km. At this rate, the freeway could easily have been made in Germany. 75% of Lyulin was Euro-funded and 25% came from the central budget. The original plan was that the works would amount to EUR 137 million, but it wound up at EUR 185 million (4).

Marking up costs while doing the work has been another systemic problem in Bulgarian road building. The contractor won the contract under certain conditions, but it subsequently turns out that unexpected challenges appear or economic circumstances evolve. As a result, the government pays a higher price to the contractor although he has originally beat his competitors by offering a lower bid.

The Trakia and Struma Motorways

The last section of Trakia Motorway

The tender for Trakia’s last 49 km was won by a consortium led by PST Holding, with a bid of EUR 106 million, which later, however, swelled to EUR 119.6 million EUR 2.2 million/km. In comparison, the construction of Lot 2 of the same Trakia motorway was contracted at EUR 70.5 million by the Bulgarian Trace Highway Consortium. One kilometer from the Stara Zagora-Nova Zagora section cost only eur 2 million, with a price projection in the tender package of eur 3 million. One of the consortium partners, PSI, which is part of Trace Group Hold, built Trakia’s Lot 1 for EUR 2.6 million per kilometer. Way back in 2005, a Bulgarian-Portuguese consortium proposed to build the entire Trakia motorway for EUR 2.7 million per kilometer.

The 17 km stretch between Dolna Dikanya and Dupnitsa on the Struma highway saw developments similar to the situation with Trakia’s last section. This stretch was supposed to cost EUR 35.7 million or 2.1 million per kilometer. But the actual construction cost went beyond EUR 41.7 million (EUR 2.4 million/km) (5).

All these amounts have already been coughed up by Bulgarian taxpayers. But still worse bills are looming on the horizon:

The reckoning is pretty straightforward:

Nearly 14 times as costly as the Norwegian tunnel

One of the projects in the pipeline is the Kresna Gorge tunnel. It is estimated to cost EUR 125 million, but practice shows that the price typically appreciates by 15-25%. The Ministry of Regional Development and Public Works (MRDPW) has specified that the sum cited includes the redesign of the new Struma motorway section, the actual construction of 3 km of it as well as the Zheleznitsa tunnel (6).

For comparison, the world’s longest tunnel is the Norwegian Lærdal. 24.5 km long, it connects the cities of Laerdal and Aurland. According to published data, this facility, opened 16 years ago, cost EUR 120 million (7). It works out at about EUR 5 million/km, almost as much as Struma’s latest lots. The Kresna Gorge tunnel would amount to over EUR 67 million/km: while it is fair to add inflation since 16 years ago, this sum is still exorbitant.

The Laerdal tunnel passes through an area of high altitude, up to 1600 m. It was the first one to have a new generation of ventilation and a car exhaust/ air-cleaning system installed. Even if inflation has since sent prices up by 50%, which is way over the real values, there is no plausible explanation why the Kresna tunnel should be nearly 14 times costlier than the Scandinavian one.

The longest tunnel in China is the 18 km Zhuanshan. It opened in 2007, less than 10 years ago. Its construction cost was USD 410 million or nearly USD 23 million/km.

Just a year ago, when the prices of our motorways had already begun its steep upward climb, the chairman of the Road Infrastructure Agency, Lazar Lazarov, explained that our national roads were constantly under repair because Bulgarian highways were the cheapest in Europe–and their maintenance was even cheaper. He argued that a kilometer of autobahn in Germany was ten times as costly, while the average price of a motorway in neighboring Serbia was twice as high.

Only this ain’t so or was only maybe true years ago. During 2015 the government was contracting road construction at EUR 5.6-6.7 million/km. Price tags of this magnitude would be competitive in France, Belgium or Italy. As far as quality and subsequent repairs are concerned, these are out for everyone to see.

Share of national roads in a good state of repair, %

2) National Company for Strategic Infrastructure Projects, supervision of the design and works in the furtherance of Hemus Motorway (Stage 1), http://www.ncsip.bg/index.php?id=15,

5) Capital weekly, The Costliest motorway, The Struma section is a price record holder for the last three years, http://www.capital.bg/politika_i_ikonomika/bulgaria/2012/12/10/1965476_nai-skupata_magistrala/?sp=1#storystart

7)  Frog News, Disgrace! The tunnel near Kresna is 14 times as expensive as the champion Laerdall, https://frognews.bg/news_103135/POZOR!-Tunelat-krai-Kresna-14-pati-po-skap-ot-shampiona-Lerdal/