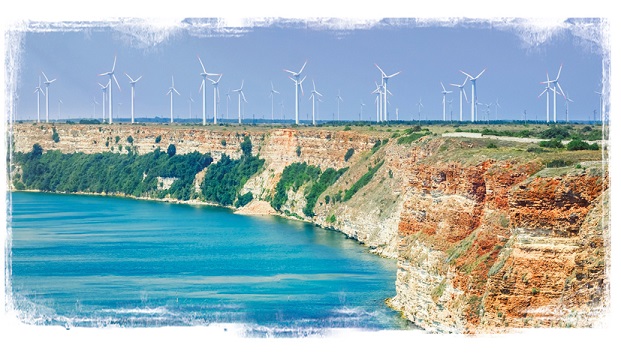 Bulgaria was found guilty by the European Court of Justice of failing to comply with environmental rules by allowing the erection of six wind power farms in Kaliakra, a headland on the Black Sea. Apart from being found illegal, these farms were also generously subsidized as ‘green energy’. The government has neither removed these illegal facilities nor withdrawn its aid. The bill already amounts to hundreds of millions of euros taken from taxpayers and it might grow further.

Here is a brief account of what has happened so far: the European Commission wants the Bulgarian government to stop providing state aid to the illegal wind farms near Cape Kaliakra, for which Bulgaria has already been convicted by the European Court of Justice in Luxembourg. However, the Bulgarian side refuses to comply, resorting to a variety of explanations. According to rough estimates, this will cost taxpayers hundreds of millions of euros. The final tally, however, could exceed half a billion if Brussels imposes a non-compliance fine on Bulgaria.

These conclusions are based on data that the Bivol website for investigative journalism has obtained from the Energy and Water Regulatory Commission, and within the scope of Regulation 1049/2001 a.k.a. “the European APIA (Access to Public Information Act)”.

Why was Bulgaria found guilty?

Bulgaria joined the European Union on January 1, 2007 and thereby committed itself to comply with the European legislation, including on environmental protection. But the country has since failed to deliver on its commitment because the authorities did not designate Cape Kaliakra as a Special Protection Area (SPA), as the European Court of Justice argued in its decision of January 14, 2016. The Court attached a detailed list of provisions from European directives breached by Bulgaria because it licensed the construction of six wind power farms and a golf course there.

The Court’s decision makes it clear that the wind turbines were greenlighted prior to the country’s EU accession; however, “it is clear from the Court’s case-law that Article 6(2) of the Habitats Directive also applies to installations the project for which was approved by the competent authority before the protection provided for in that directive became applicable to the protection area concerned.” In other words, once Bulgaria joined the EU, it was bound to discontinue the installation of wind power turbines in this region but failed to do so.

An exchange of letters between Brussels and Sofia ensued. Finally, the procedure led to the filing of a case that Bulgaria lost. The wind power farms and the golf course have been deemed illegal ever since January 14, 2016, the date when the Court of Justice’s judgment was released.

Out of love for subsidies

Investments in these wind farms were motivated by the possibility of receiving subsidies under the Bulgarian Energy from Renewable Sources Act. The electricity from these facilities is bought at a higher than market price. In its 2016 state aid notification to the EC, Bulgaria stated the exact preferential prices. The government has subsequently rolled back its RES preferences, yet prices still remain higher than market ones.

This support scheme covers all power plants using renewables, e.g., wind, water and photovoltaic, over the period 2011-2021. The estimated public support for green energy for that ten-year period amounts to EUR 6.7 million. This is the cash that taxpayers are bidding farewell to for the sake of clean energy.

This is also one of the few forms of state aid to private business that Brussels has chosen to promote as part of its clean energy transition strategy. However, subsidies are supposed to be provided only when rules are complied with. The European Commission has given a clear sign that public money is ill-spent on projects which are built or function in a state of non-compliance. An e-mail from the European Commission’s Directorate-General for Competition to the Bulgarian authorities raises the question of taking the illegal wind farms off support. As published by Bivol, the message reads:

“This is the text of the commitment which we will request from the Bulgarian authorities regarding the problematic wind installations that failed to comply with the environmental provisions:

The Bulgarian authorities have confirmed that the wind turbines, subject to the decision of the Court of Justice of the European Union in Case ‘C-141/14 Commission v Bulgaria’, will not receive aid under the aid scheme until the Commission is satisfied that Bulgaria has implemented the necessary measures to comply with the decision.”

Bulgaria has in practice refused to suspend its support. This is how the Bulgarian government responded to the Commission on August 1, 2016:

“With regard to the information included in our previous email, we would like to point out that all wind turbines, subject to the decision of the Court of Justice of the European Union in Case ‘C-141/14 Commission v Bulgaria’, have signed preliminary contracts to join the electricity grid before the enactment of the Energy from Renewable Sources Act. (…)

We would also like to point out that the Energy from Renewable Sources Act has no (retroactive) effect upon existing wind turbines.”

This e-mail has an attachment, a table listing the power plants affected by the Luxembourg Court decision and indicating the years in which the plants joined the electricity grid.

This recalcitrance vis-a-vis the will of the European Commission is manifest in a different way in the notification to the Commission on government support. Point 86 of the 2016 document states:

“Regarding the decision of the Court of Justice of the European Union on case ‘C-141/14 Commission v Bulgaria’, the Bulgarian authorities have declared that none of the wind power facilities, included in the scope of the current support measures, are subject to the aforementioned court decision. The Commission, therefore, notes that, as the Bulgarian authorities have stated, no aid will be granted to any of the wind farms subject to that decision on the basis of the current support measure, a notification for which has been sent.”

In other words, Bulgaria claims that these six wind power plants were built and connected to the grid before the current support scheme was enforced, and therefore the latter does not even concern them.

What is the exact amount of state aid?

The total capacity of the illegal turbines in all six wind farms is 232.5 megawatts–which adds up to 2% of the overall capacity of Bulgarian electricity generation. Even though the European Court of Justice has found the facilities illegal, they keep receiving subsidies.

The National Electricity Company’s contract with the biggest Kaliakra operator, AES Geo Energy, specifies a price of EUR 95/MWh to cover the full effective annual working hours of the wind generators, up to 2,250 hours a year. The contract was uploaded to the Ministry of Energy website: it was signed in 2008, for a 12-year period. However, there is no public information available about the exact amount of MWh paid, which makes an accurate calculation of the overpaid subsidies impossible. A rough estimate would suggest that taxpayers might have supported this particular operator with hundreds of millions.

But that is not all. The European Commission has yet to decide whether or not to slap a fine on Bulgaria. It could amount to a one-off penalty of EUR 1.5 million plus EUR 20,000 for each day until the Commission’s demands are met. The removal of all illegal power plants is among these demands. By the end of 2017, there have been no indications that the government intends to implement the Court’s decision.

Bulgaria’s notification to the European Commission on “Supporting the production of energy from renewable sources in Bulgaria”, http://ec.europa.eu/competition/state_aid/cases/263396/263396_1780805_102_3.pdf

Judgment of the Court of Justice of the European Communities against Bulgaria on Kaliakra, http://curia.europa.eu/juris/document/document.jsf;jsessionid=9ea7d0f130d6bdd1c68d36dd494d8318daf232c51f32.e34KaxiLc3eQc40LaxqMbN4PahmLe0?text=&docid=173520&pageIndex=0&doclang=BG&mode=lst&dir=&occ=first&part=1&cid=159716

Letter from the Directorate-General for Competition to Bulgaria; Reply of Bulgaria to the Letter of Suspension of Aid for the Illegal Wind Farms; Electricity Purchase Agreement between NEC and AES Geo Energy Ltd., https://me.government.bg/files/useruploads/files/obshtestven_syvet_dog/Contract_AES_GeoEnergy1.pdf