During  13th–1 5th April, the second edition of Together for the Future, the national meeting of civic group members and partners from the Contract Romania national civic network, took place in Sibiu, Romania.

The Together for the Future II conference was organised by Inițiativa Romania in cooperation with the Friedrich Naumann Foundation for Freedom and is a continuation of a Contract Romania project that began in 2017. The aim of this project is to create a national network of civic groups, open to all formally or informally established communities, that believe in individual freedom and act in support of and in the spirit of liberal democracy, the rule of law, and human rights. 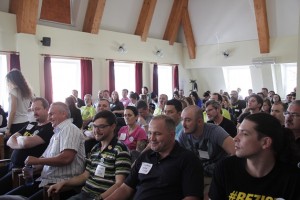 Together for the Future II Conference. Day 1

This event welcomed over 120 people from 23 civic organisations established in 16 Romanian cities and the diaspora. Representatives of four political parties also took part in the plenary debates and the working sessions.

The participants discussed and decided upon the civic coalition’s agenda for 2018-2020: projects will include the Romanian diaspora and tools to map Contract Romania’s members’ skills, projects, and needs. The main topics included building trust and collaboration within the coalition, the civic network’s expansion and its sustainability, the network’s decision mechanisms, and communication tools. Furthermore, the civic organisations invited the political parties to discuss among themselves how to improve election laws.

The event consisted of three parts, underpinned with quiz questions about Contract Romania’s values and programme. The first part of the event was dedicated to allowing individual members to know each other better and then also provided an opportunity for the new organisations joining Contract Romania to present themselves. Participants were invited to create photo expositions with pictures of their organisation’s projects. Raimar Wagner, Project Coordinator for FNF Southeast Europe in Romania, emphasised the last month’s achievements in terms of civic engagement and collaboration. A group interactive working session was dedicated to identifying Contract Romania’s strengths, weaknesses, opportunities, and even the threats to it. This exercise served as the basis for a later working session dedicated to Contract Romania’s objectives: make the objectives SMART. 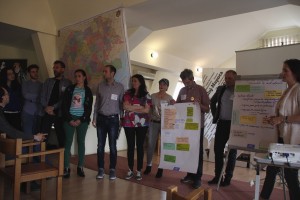 The second part of the event was dedicated to discussions on building a better collaboration within Contract Romania, to the electoral law, and to working sessions on Contract Romania’s sustainability, capacity building, and projects. During the plenary session on electoral law, representatives from Uniunea Salvați Romania, the National Liberal Party, the Free People Party, and Romania 100 elaborated their views on the country’s election laws. The second day of the event ended with the group brainstorming about developing a vision for Romania and concluding that there is a need for larger and more inclusive participation from diverse stakeholders in order for Romania to have an ascending path in the spirit of liberal, democratic values.

The last part of the conference was dedicated to working groups’ playbacks and drafting the next actionable steps for the national civic network and its friends.

Contract Romania is a project started in April 2017, when representatives from five organisations worked together on drafting a collaboration protocol and a programmatic document. On 22 May 2017, the organisation publicly launched a national platform of civic groups called “Contract Romania”. This launching event was supported by the Friedrich Naumann Foundation for Freedom Southeast Europe and by the US, the Netherlands, and the UK embassies in Bucharest and by well-established and respected Romanian NGOs.
The core of the network was formed from eight civic groups. In October 2017, during the first conference of Together for the Future, the national civic network Contract Romania expanded to fourteen civic groups and then to twenty four at the Together for the Future II conference in April 2018.