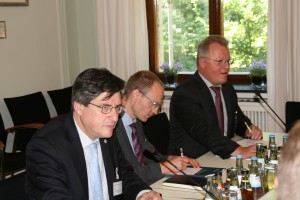 In the Ukraine conflict it became clear once again that Russia not only uses it energy resources as a central government revenue source, but also as an instrument of foreign policy. This applies to the post-Soviet states as well as the Southern and Eastern Member States of the EU. Nevertheless, Russia will remain in the near future as the major exporter of oil and gas to the EU.

So at the conference of the FNF and DGAP in Berlin the following questions were raised by many European energy experts from science, politics and the economy. Who influences the world energy market? Who will define the future of EU energy policy in the geopolitics of East Europe? What is more important, setting legal frameworks or developing alternatives to the Russian energy? How do you deal with the difficult energy partner Russia? 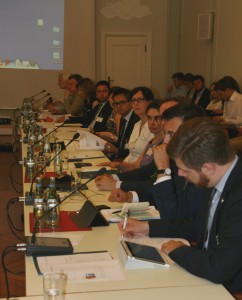 It became clear in the discussions that energy in the last few months has developed into a highly politicized topic. In fact, it can be assumed that no important Gasprom decisions can be taken without the consent of President Putin. Moreover, attempts have been observed to influence the countries, which are particularly dependent on Russian gas, such as Serbia, Macedonia and Bulgaria.

On the other hand, in the heated political situation, the commercial interests as a drive for energy policy decisions are largely underestimated. It is therefore not of less importance to know that Russia is in a high degree dependent on the EU- states for its gas sales. The existing gas surplus suggests a reduction of the flow rates, for instance down on the westerly Yamal Peninsula borders. The idea that China could in the middle or long term replace the EU as a customer is an illusion.

Besides the analysis of the energy political conflict situation, another central point at the conference was the discussion of solutions. The European Commission has been expressly praised, as they successfully set rules. Although the Energy Union was critically illuminated. There was agreement among the experts that the European energy market is an enormous challenge because of its heterogeneity. Already the urgent route expansion was hampered by the diversity of national interests. In the case of Germany the “provincial“ energy policy continued at a national level, so that you can rather speak of 17 turnarounds, than of an energy revolution.

Following up various expert working groups at the conference was the public panel discussion on “The European Dance on the Russian Gas Flame”. Dr. Stefan Meister (DGAP) and Daniel Kaddik (Project Director of FNF Southeast Europe) presented the results of the working groups. 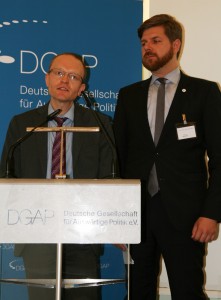 The Moderator Dr. Sylke Tempel (Editor-in-chief of “International Politics”) then evoked an interesting discussion among the panelists. Dr.Karsten Rolle from the Federation of German Industries (BDI) said that in the common energy policy not only rules are needed, but also the confidence of their implementation during crises. Dietmar Brockes, Economic and Energy policy spokesperson for the FDP fraction from his state North Rhine-Westphalia (NRW), reported that the energy debate is primarily orientated on cost economic efficiency and environmental compatibility, while the issue of security of supply is still lacking attention. For the implementation of a common European energy market, he also suggested that this could happen only with those Member States that are willing and able to establish and gradually expand it.

Dr. Elkahm Nuriyev, former Director of the Center for Strategic Studies in Baku and currently Humboldt Senior Fellow at the Foundation for Science and Politics (SWP), argued in particular for a better understanding of the Russian politics and warned of a damage to the energy partnership for political reasons. Dr. Kirsten Westphal (SWP) pointed out that gas and oil prices at the moment, despite the geopolitical crises with Russia and the Middle East, are very low and the diversification incentives conceivable, therefore low for companies. Finally, there are no easy answers and great solutions in this field. In conclusion the European energy policy could only be a policy of small steps.