Against the backdrop of tough times for the opposition in Macedonia, the Liberal Democratic Party (LDP) held a regular congress to elect a new party President on 1st February 2015. This event brought together party members and guests who anticipated to be the first to hear the programme of the new party leadership. Regardful of the LDP’s new course, representatives of the Friedrich Naumann Foundation for Freedom Southeast Europe visited Skopje on the congress day.

With his opening words, Daniel Kaddik, FNF Project Director for Southeast Europe, expressed his concerns about the lack of feasible progress in the country and highlighted the need for a strong and united liberal party. “Democratic development is the only perspective for Macedonia and the path to the democracy is the path of Liberalism,” Kaddik underscored.

In his turn, the outgoing LDP President, Andrej Zernovski, confessed that the preceding period had been extremely difficult for liberals in Macedonia. Even so, the party has won through all the speculations about its fall and is now looking forward to proactive legislative participation. Moreover, as stated by Zernovski, “the party is committed to fight against the on-going totalitarianism and usurpation of power which jeopardise the democracy. With renewed leadership, the LDP will successfully manage to withstand the coming dramatic political battle”.

The only candidate for LDP President was Goran Milevski, who presented his views on the future of his party and country in an emotional speech. He underlined that Macedonians have been living in a time of fear, with the suppression of fundamental rights and freedoms caused by totalitarian governance and extremely politicised public institutions. Yet, “the LDP is not afraid and will firmly uphold its views and ideas. It will support everyone who dares to raise their voice against the present injustice, without regard to ethnicity, religion or social status,” declared Milevski from the lectern. 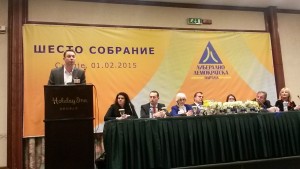 Legislative amendments which allow voters to choose among individuals, rather just among parties, are the principle priority of Goran Milevski. Accusing the opposition of hindering economic development, he underlined as a second priority the expansion of foreign investment and the re-allocation of public finances towards small and medium-sized enterprises.

As a strong supporter of liberal values of the free market and the freedom of thought and expression, the LDP is a promising party, able to guide Macedonia on the path towards democracy and economic prosperity.