A strategic planning workshop of the Liberal South East European Network (LIBSEEN) was held in Sofia, Bulgaria, to evaluate the network’s capacity and to help strengthen the political cooperation within Southeast Europe.

The strategic planning workshop came as the culmination of the efforts to revitalise regional cooperation in Southeast Europe over the past two years. LIBSEEN began to intensify its activities in 2015 following the establishment of its Steering Committee in Ljubljana. The network also started to increase its visibility within the European liberal family following the success of the Leaders Meeting Sofia. 2016 proved to be even more successful for LIBSEEN with the doubling of the number of regional events and the development of the network’s capacity building element in the form of the ELF Regional Academy for Liberalism.

To determine how the network could be further strengthened and developed in the future, the LIBSEEN Steering Committee accepted FNF’s invitation to hold a strategic planning workshop in Sofia, Bulgaria, on 23rd and 24th January 2017. This event was supported by the Foundation and organised in cooperation with the Movement for Rights and Freedoms Party of Bulgaria, VVD International, and the National Democratic Institute.

The workshop was attended by representatives from LIBSEEN member organisations and partner organisations with activities in the region of Southeast Europe. The programme was structured to guide the participants in a strategic planning exercise that would foster discussions about the key aspects of the network’s functioning  and work.

The objective was to define the role and the function of LIBSEEN as a regional network, especially in relation to the Alliance of the Liberals and Democrats for Europe Party (ALDE).  The workshop was also intended to outline LIBSEEN’s activities and to define its organisational structure.

Speaking about LIBSEEN’ s role in the region, Roman Jakič, a former ALDE Party Treasurer and a delegate from the Slovenian Alliance of Social-Liberals, said: “We have gathered here, both members and our partners, because we feel responsible for the Southeast Europe region, a region that is still fragile and lagging behind the rest of Europe. We want and need to help each other succeed in promoting liberal values in the region and ensure that our countries continue to move forward.” 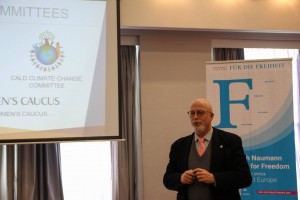 Before the working sessions on LIBSEEN’s future, the participants had an opportunity to listen to presentations; first by Rainer Adam, Regional Director of FNF East and Southeast Europe, about the Council of Asian Liberals and Democrats, then Luke Akal on the functioning of the African Liberal Network, and finally Andrew Burgess, an ALDE Party political adviser, who identified the best practices for regional cooperation by political parties and enumerated the many of opportunities for the Southeast European network to engage with the ALDE Party.

As a result of this strategic planning workshop, LIBSEEN formed five working groups that will continue to work on the topics of Organisational Structure, Manifesto, Events and Activities, Policies and Resolutions, and Communications. These working groups were given the task to produce draft papers on the network`s functioning and organisation, which are to be presented on the Steering Committee’s next meeting.