Bulgaria`s capital Sofia yet again became the centre of liberal thought on 18th and 19th September 2015. Liberal dignitaries from entire Southeast Europe came together for the annual leaders` meeting of the Liberal South East European Network (LIBSEEN) “Liberalism – a new qualitative factor for the European integration.” The event was hosted by the Movement for Rights and Freedoms, with the support of the Project Office for Southeast Europe of the Friedrich Naumann Foundation for Freedom (FNF) and the Dutch People’s Party for Freedom and Democracy (VVD).

The Western Balkans should not be left alone 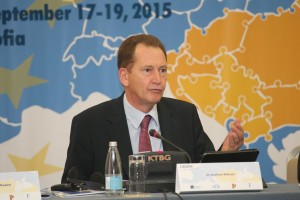 Calling for a prompt debate on the EU integration of the Western Balkans, Sir Graham Watson remarked in his opening speech “the European Union has many failings, but the great tribes of Europe are better together than apart; and they are better off as an open society than as a closed society.”

During the first panel, moderated by our Project Director Daniel
Kaddik, the LIBSEEN leaders shared their views about liberalism as a political and value platform for a new EU enlargement model. Diversity was pointed out as its main characteristic by the President of MRF, Lyutvi Mestan, who remarked, “the present times demonstrate that the integration and the coexistence of different cultural and civilizational models are the core of stability, peace and prosperity”. “Multiculturalism is alive!” Mestan emphasized. Hans van Baalen added that the common values and common market should not be taken for granted, but need to be further developed in a way that best meet the challenges of the EU`s future. “We shall not stand still, otherwise, we will lose,” van Baalen noted.

Following this lively discussion, the LIBSEEN leaders adopted a resolution on the European integration of the Western Balkan countries. The resolution calls for revision of the EU enlargement moratorium introduced by the European Commission and highlights the future benefits of EU membership for both the current and future member states. All participants agreed that instead of a unilateral moratorium, the Commission could launch a mechanism for cooperation with and integration of the Western Balkans which could significantly advance the democratisation of the entire region. The resolution will be forwarded for consideration to the ALDE party congress in November.

Liberalism has no borders in Europe 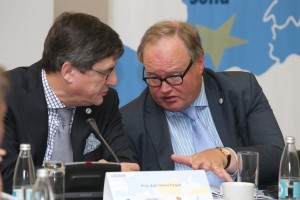 “The EU between the ideas of democracy, multiculturalism, and stability and the realities of Southeast Europe” was the topic of discussion during the second panel, which stressed the impact of the refugee crises at the EU level. “We need a common EU approach on the question of the refugees,” Prof Paqué remarked, underlying the need for an EU strategy in line with liberal ideas.

The contribution of non-government organisations and civil societies to the promotion of liberalism in Southeast Europe was the topic of discussion during the last session for the day. Dr Rainer Adam, Regional Director for East and Southeast Europe of FNF, Robert Benjamin, Regional Director of National Democratic Institute, Sebastjan Pikl, Director of NOVUM Institute in Slovenia, and Sibel Redzheb, Executive Director of New Europe Liberal Society from Bulgaria, shared their experience in promoting and upholding liberalism among the societies of the post-communist countries in the region. “Europe needs to catch up with the Balkans, not the other way around,” remarked Benjamin, “it is the only place in Europe where people of different ethno-religious backgrounds have coexisted. Here the diversity is genuine and has its roots.” 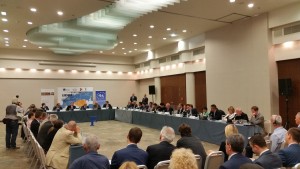 As Vesna Pusić, Chairwoman of LIBSEEN and Deputy Prime Minister
of Croatia, commented: “As forward-thinking individuals, liberals have always been instrumental in promoting change. In Western Balkans, this has meant advocating a European future for the countries in the region and maintaining a commitment to reforms.” Indeed, with a clear prospect of EU membership, the Western Balkan countries will keep their motivation to firmly follow the line of democracy and prosperity, which is the only alternative for the region.