This year’s Free Market Road Show across Europe and the Caucasus was convened in the aftermath of Trump’s election as President of the US and Brexit – both events menacing the liberal basis of modern free economies.

To initiate an open, wide-ranging debate on the negatives of protectionism and divided Europe, the Austrian Economic Centre and the Friedrich Naumann Foundation Southeast Europe organised the traditional FMRS 2017 in Bulgaria on 23 March. Students from Sofia University and the American University in Bulgaria had the chance to meet and interact with six panellists during this event, hosted by the American University in Bulgaria, as a part of this travelling initiative that involves 45 cities and over 100 partner organisations.

Barbara Kolm, President of the Friedrich A. v. Hayek Institute in Vienna, Austria, and Director of the Austrian Economics Center

The first panel discussed President Trump’s protectionism claims, focusing on the negative consequences they may have for the US and global economy. To exemplify this better, Barbara Kolm, President of the Friedrich A. v. Hayek Institute, Austria, highlighted that it was exactly the global division of labour, which has made economies successful and that regulations on trade can only hamper true progress. “We know America cannot become great again with closed borders and protectionism, and President Trump knows that,” Ms Kolm wrapped up. On his own behalf, Gerogi Ganev, a member of the Bulgarian Centre for Liberal Strategies, pointed out that the final customer always benefits from free trade because it guarantees efficiency, open competition, and the lowest possible prices. Being truthful, protecting producers should be translated as “protecting producers at the customers’ expense”, according the Mr Ganev,еspecially since the latter need to pay more for goods and services, just to allow certain businesses to operate. Hence, regulations should be minimised, likewise any form of government interference in market rules. This will surely create fertile grounds for sustainable economic progress.

Populist tendencies are tearing apart today’s world, with the European Union being one of the clearest examples. Until recently, its sixty years of prosperity and economic growth did not give rise to concerns about the future form and vision for the community. However, the financial and migration crises, Brexit, and far-right nationalism have triggered challenges for which the EU is not prepared. It is evident today that the different levels of integration, the diverse perceptions of the necessity for the EU, and the need for further growth need to be addressed and the future vision of the EU thoroughly discussed. “Brexit triggered a discussion on the future of the EU and now, sixty years after the signing of the Treaty of Rome, we finally have a proper debate,” remarked Daniel Kaddik, Project Director of the Friedrich Naumann Foundation Southeast Europe, during the second panel of the event, as he remained critical of the populist voices which aim to divide the European community. Indeed, Europe has never been a safer place. In fact, the continent has never been more prosperous then today, despite the nationalistic claims, which have turned bad news in the milestone of today, but remain silent about the numerous positive aspects. They claim that we have never been worse off, which is untrue, because prosperity across the globe has never been so high. Thanks to the opening of economies and of global markets, the world of today enjoys rapid development levels and the lowest poverty rates ever achieved. 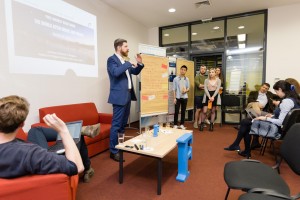 These two panel discussions were followed by an interactive, open-space discussion session, which tackled issues of interest for the student attendees. These appeared to be the potential negative consequences for free markets, countering identity politics, the “two-speed Europe” trend, and the role of the media in the rise of 21st century populism. With a final round of presentations, the students involved in the open-space group debates summarised the solution they identified, contributing to the all-embracing elaboration of this year’s FMRS topics.