How to boost the Romanian economy by fostering SME`s was the topic of the event held on 22th of September at Athenee Palace Hilton in Bucharest. It was a difficult debate because on the one hand the representatives of the entrepreneurs demanded a solution for “easy credits” offered by banks for start-ups and small firms, while on the other hand the Vice Governor of the Romanian National Bank, said that SME’s are after the crisis not reliable for banks. In the end both sides agreed on a solution, offered by the Vice Governor to the audience.

The event with more than 60 entrepreneurs and guests from media and civil society was hosted by Friedrich Naumann Foundation for Freedom in collaboration with the Centre for Institutional Analysis and Development Eleutheria.

The first part of the event gathered entrepreneurs in a round table in order to talk about what is missing and what is needed in the Romanian economy to create real economic growth. The interactive exercises in open space format enabled most of the young entrepreneurs to discuss openly the problems they have in daily business. But not just the state and the bureaucracy were considered as big problems. Moreover, uneducated employees and lack of information proved to be equally problematic. Whereas, ”easy financing” was only to a lesser extent, but still, highlighted as a challenge. 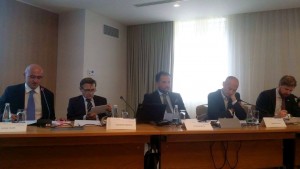 The results and the conclusions of the Workshop were presented in a conference with representatives of governmental and non-governmental stakeholders in order to identify solutions to the SME`s problems in Romania. The participants in the conference had the chance to debate with speakers such as: Daniel Kaddik, Project Director of FNF Southeast Europe, Bogdan Olteanu, Vice Governor of the National Bank of Romania (BNR), Catalin Beciu, Secretary of State for SME`s, Valentin M. Ionescu, former Minister of Privatisation, today entrepreneur and initiator of the Business School in Romania (from left to right).

According to the moderator of the discussion, Horia Terpe, the Executive Director of the Centre for Institutional Analysis and Development Eleutheria, who presented the conclusions of the round table, the main problems in the Romanian economy are identified in three areas: financing, interpersonal relations, the relation with the state. It seems that, at least, regarding financing, the entrepreneurs found the inflexibility of the banks as a real drawback. They thought that SME`s and start-up businesses should be credited by the banks with the guaranty of the state.

As a response to this part of the topic, Bogdan Olteanu, Vice Governor of the National Bank of Romania, explained that: “the SME`s are the most unsafe debtors for the banks. The banks have great difficulties in reconstructing the state of optimism after the economic crisis – and great difficulties in convincing the stockholders the SME`s should receive investments […] because the banks have not paid dividends for a long time; from America to the other corners of the world, it`s not a Romanian problem. The banks cannot afford risks. Then, they will straiten the credit areas to those areas, where the risks are smaller and the reimbursement performance is bigger”. As a solution to the problems of the SME`s, Olteanu mentioned the construction of a guaranty mechanism, which should address the fact that “SME`s in Romania are undercapitalized.”

Regarding the matter of capital, Catalin Beciu, Secretary of State for SME`s argued that Romania is still in the “primitive accumulation of capital stage” after 25 years since the totalitarian system. Therefore, entrepreneurs should consider more training and professional development and ask for advice to experts as top priorities. 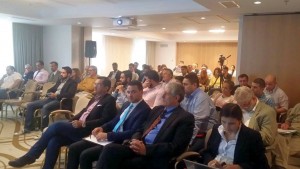 Actually, what entrepreneurs need is less intervention of the state and less regulations, so that the entrepreneurial culture can foster and the market can function freely. “The entrepreneur is a hunter of opportunities, he is capable of giving another meaning to the abilities he already has. The problem an entrepreneur deals with is that, although he compares the costs, he might not foresee the perspective for a higher cost in the future”. This line of thought was well picked up by Valentin M. Ionescu, entrepreneur and initiator of the Business School in Romania.

A minimal state interference would lead to creating jobs and economic growth. If they are left to operate freely, the entrepreneurs would act through informal laws for the benefit of the economy. Unfortunately, there is “a class of privileged people with access to privileged information, who put pressure in order to distort the market mechanisms through regulations”, as Mr Ionescu stated.

In conclusion, a common problem identified also by Mr Daniel Kaddik – Project Director of FNF Southeast Europe- is the asymmetry of information between the private sector and the administration, “as a major source of corruption and a barrier that hinder businesses to grow”. He argued in particular for the application of e-governance as a solution to this asymmetry. Finally, it takes political will to implement the recommended solutions.

You can watch the entire debate in Romanian here.

For a photo album from the event: